I've seen this scent floating around the web for awhile, but to be honest, the name really turned me off.  Finally, I decided to purchase a bottle and give it a whirl.  Boy was I surprised!! 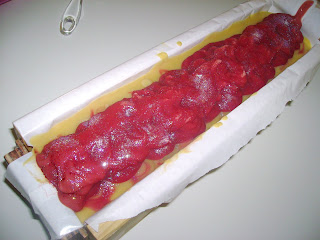 Despite the name, this fragrance smells absolutely delicious.  It's a fun, fruity combination of everything that monkey's love: bananas, pineapples, cherries, watermelon, grapes and much more. 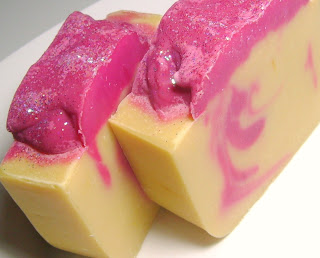 I know that I said that my next swirled batch of soap would be 15-20 colors but... I chickened out.  What can I say.  Instead this has only 8 colors.  This scent is a delicious blend of Clementine and Trippy Hippy (both from Southern Soapers) which is an Indonesian Patchouli.  Patchouli is one of those scents that you either love or hate and I LOVE it.  It reminds me of wet dirt, awwww. 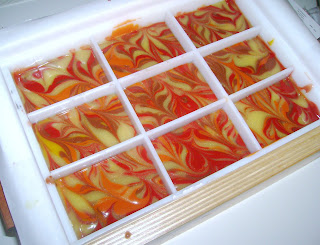 Usually when I make Orange Patchouli, the Patchouli tends to dominate the soap (which is fine with me, btw).  This time, however, I decided to let the citrus take center stage.  The Clementine fragrance oil is very realistic true to it's name and the Patchouli grounds it beautifully with an earthy edge.  I can't stop sniffing it. 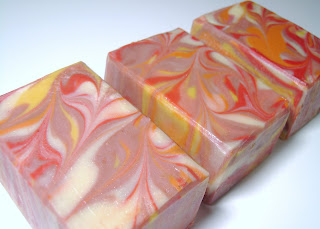 For this batch I used a fragrance oil from Southern Soaper and Labcolors from Brambleberry again.  The Vanilla content in the FO caused it to darken.  It started off as a nice off white color with Purple and Flamingo Pink dropped in. 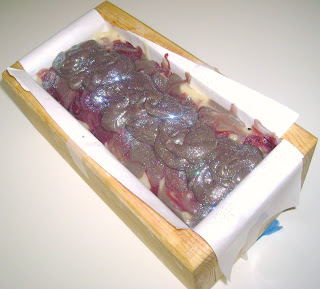 As you can see, glitter is my new thing.  It's perfect for cosmetically fixing up "soaps gone bad". 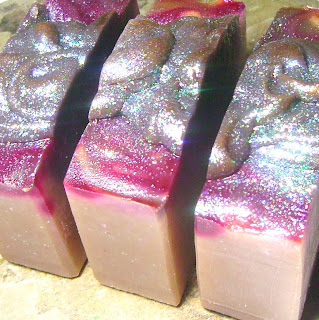 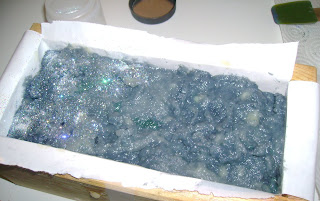 This batch of soap gave me the honor of experiencing my very first seize.  After adding the fragrance oil directly to the soap mixture, (although the manufacturer recommended diluting in oil first),  I poured a portion into two jars for the colored portion then began pouring into the mold.  The mixture actually firmed up on me mid pour!! 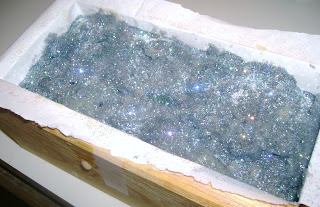 I quickly began spooning the remaining batter into the mold then clumped the colored blue portions on top.  I was determined to get some sort of swirl in there, so I forced the spatula in to the mix and pulled everything around a bit, then banged the heck out of it onto the counter.  The top actually reminded me of the rustic look that Hot Process soap has.  I decided to cover that with some iridescent glitter.  It's a good thing that I tend to soap at cooler temps or this would have wound up being HPed
"Water Nymph" has a fresh aquatic scent. 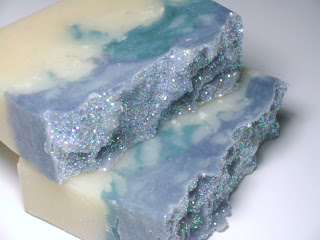 I swear this scent form Southern Soapers is hands down one of the most delicious fragrance oils that I have EVER smelled.  My favorite type of soap is almost anything fruity and this takes fruit to a whole other level!
It smelled nice out of the bottle but was nothing to scream about. But, WOW! It really came to life in the soap. 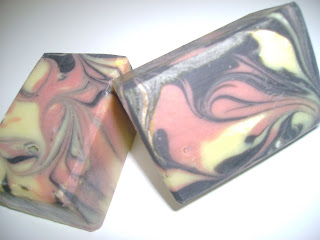 I've really mastered the  use my Birch Mold and those dividers that didn't seem to want to let my soap go. lol.  I'm 2 for 2 with it now  :0) 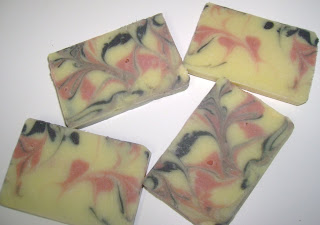 The uncolored portion of the soap turned yellow at first but has lightned to an off white in the time after these pictures were taken.
Posted by Kia - Petals Bath Boutique at 9/18/2010 10:42:00 AM 1 comment:

O.K., so, this is not a regularly scheduled post!! 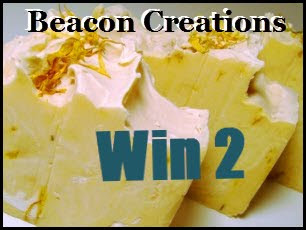 I am so, so, so excited right now! I am literally twitching in my seat and making so many typos that it isn't even funny.  Don't worry, I'll clean it up before posting :D
I was contacted to do and interview and giveaway contest for a blog that I found back in my EntreCard dropping days AND today it was finally  posted.   Besides my own blog, I've never had a entire post dedicated to just me and my products. I feel like a Rock Star!!
Please go check it out.  Here's the link: http://theredheadriter.blogspot.com/.  The Giveaway ends October 8, 2010 at 11:59 p.m
Posted by Kia - Petals Bath Boutique at 9/13/2010 08:15:00 PM 2 comments:

Fall is my absolute favorite time of the year so of course I had to share thisbeautiful fall Treasury curated by Beth owner of The Queen of Cups on Etsy.
BROWN SUGAR 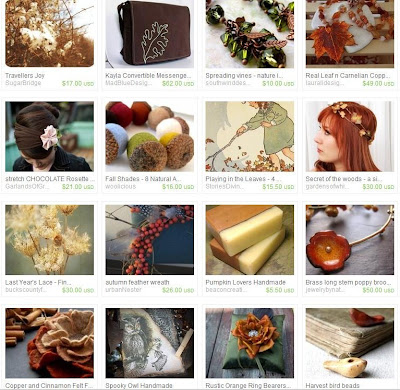 "Polar Express" is another fragrance that I grabbed from Southern Soapers.  I'm not sure what I was expecting it to smell like exactly, but it I was a little bit disappointed to find that's it's pretty much Rosemary Mint.  Which has actually been a huge seller for me in the past.  It's just not one of my personal favorites.  I think that the soap is pretty though :0) 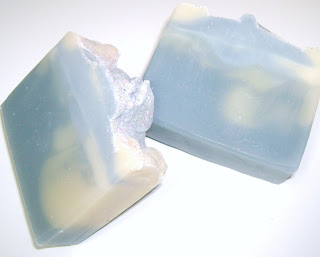 I mixed blue ultramarine with a bit of black oxide to get the wintry blue and sprinkled some iridescent cosmetic glitter that I just got from Brambleberry on top. 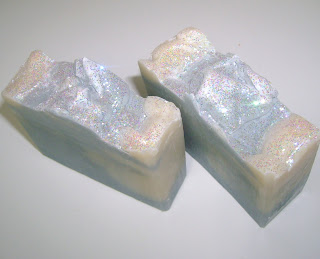 It's fresh and uplifting  without being too overwhelming.  I did add just a bit of Peppermint and Rosemary essential oils to this so that it would still have that little tingle to it.
Posted by Kia - Petals Bath Boutique at 9/10/2010 09:17:00 PM 5 comments:

Southern Soapers is closing and I managed to nab a few ounces of their fragrances in time. I’ve never used any of their products before but I was pleasantly surprised with the results. I used their Cherry Garcia and Chocolate Serendipity along with Brambleberry's Vanilla Select for the scent. 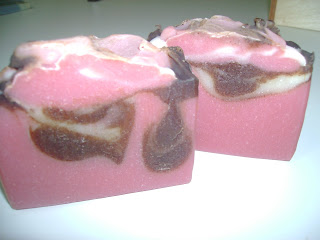 I also used Brambleberry's Red Velvet Labcolor for the pink portion.  It was supposed to be red.  That's my fault though, because I didn't read the instructions first and had to wing it.  I diluted a few drops with a few drops of distilled water and then added that directly to the soap.  I know that I missed a lot of important steps but I was already making the soap when I discovered that there is more involved to this coloring process than I initially thought. 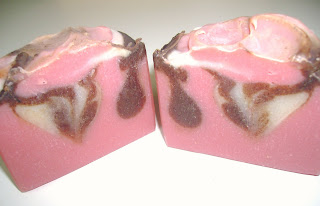 Honey I Washed the Kids 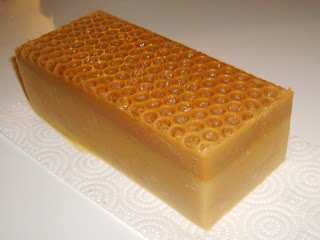 This is another LU$H type soap.  I've been trying to come up with some ideas for renaming it.  Brandon came up with "Honey B. Harvest".  I kind of like that but, we'll see.  I've been wanting to try making the soap with the holes on top for awhile and this fragrance gave me the perfect opportunity to try.  I only made a 6 bar batch because I wasn't sure how the fragrance would work in CP soap.  I've never used fragrance oil from this particular company before.  I'm really funny about deviating from what's tried and true when money is involved, lol.  But, the oil soaped beautifully.  No discoloration or acceleration. 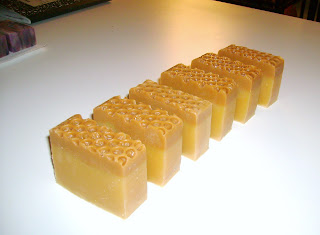