Just in time for Valentine's Day! This soap is literally just off the curing rack :-)  I'm not usually the floral, rose scent type of person, but I really, really like this fragrance. 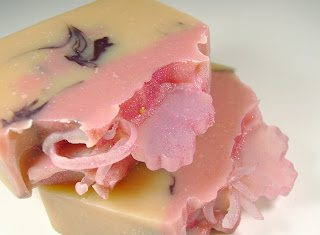 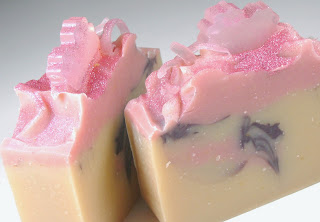 Twilight Woods is my other favorite "grown-up" fragrance. 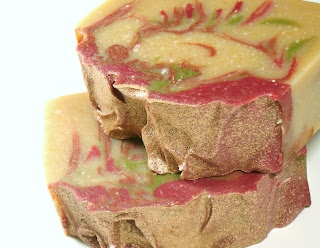 This soap is scented with Mardi Gras, a yummy fruity fragrance that I purchased form the Sage.  For the most part, their FO's are pretty reliable in CP soap, but this one went very wrong really fast.  Although, I must say that it's most likely my own fault.  I broke too many soapmaking rules using a fragrance that is new to me. I discounted the water (a definite "no no" when using an untried FO), soaped at a warmer temp (for me) than usual, used quite a bit of Jojoba Oil (which  I once read can increase acceleration) and the list goes on.  First, the batter started to rice.  So, I used the stick blender to smooth that out.  This took it to a med-heavy trace.  Then I separated it out for the colors (which were mixed in more Jojoba Oil), stirred some more and by the time I was ready to pour, it was completely unpourable. 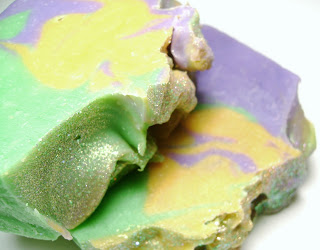 I won't say that the soap turned into a brick on my spoon, but I couldn't stir it anymore and had to spoon, bang!, bang!, spoon, bang!, smoosh, BANG! it into the mold.  I coun't use a chopstick or skewer as it was too thick.  So, the colors were dragged through for a semi-swirl with a small spatula.  I don't normally insulate, but I grabbed not one but two towels for this to make sure that everthing meshed together. 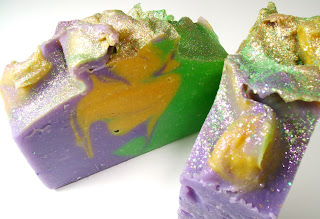 It's really a miracle that this batch turned out as well as it did.  One side was suppose to be purple and the other side green with a gold swirl down the center. 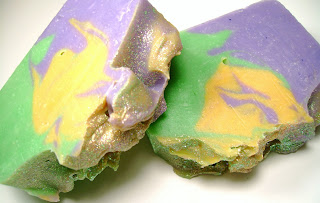 UPDATE 3/6/13: Hi guys! Thanks so much for stopping through.  I've seen some questions in the forums regarding this particular soap.  It's not an ITP swirl.  I "dropped" the dark purple and white colors in intervals at different levels as I poured the lavender base,  Then, pulled a skewer through at the very end to do the swirling :0) ~Kia

I first came across this fragrance back in 2002.  Everywhere we went, I would catch a whiff of it and literally chase down the scent.   It drove Brandon crazy.  He said I looked like a hound dog sniffing through the mall (convention center, park, grocery store, you name it) trying to track down the person with this scent. 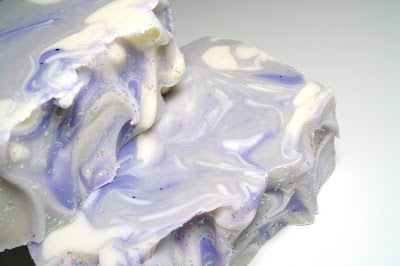 Finally, I did manage to catch someone and she pointed me to Victoria's Secret and this lovely fragrance called Love Spell.  It became my signature scent months.  Since I don't use over the counter soaps and shower gels anymore, it's nice to have finally captured this fragrance in something that I can bathe with. 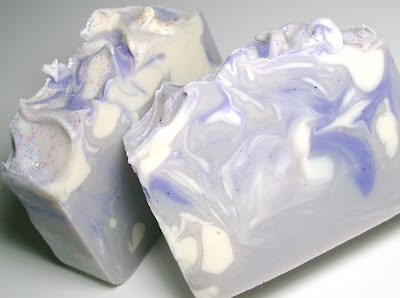 This is a wonderful scent for those who like that fresh, straight from the dryer laundry type fragrance,  It's a dupe of a fragrance from the company CLEAN. 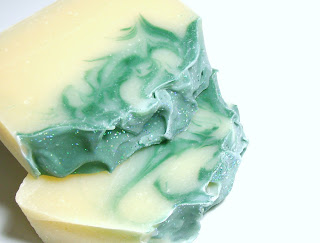 To get this pretty Teal color for the swirl, I simply mixed Blue ultramarine and Green iron oxide. 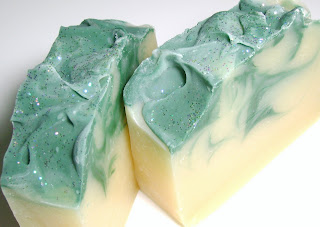 This wonderful fragrance oil comes from Bramble Berry.  It's one of my favorite "grown up" scents right now. Twilight Woods is the other. I really like all the sweet, edible type fragrances.  But, when I'm looking for something feminine but not all florally and perfumey, this is my go to. 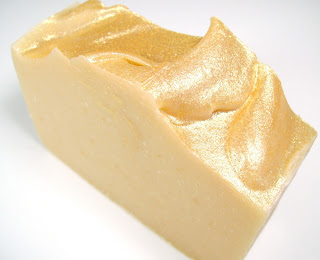 The original is never in stock when I go to B&BW, so I haven't had the opportunity to smell it yet.  However, the response from my customers has been awesome.  From what they tell me, this version is waaay better than the original which they don't like at all.  SO, with that in mind, I've decided to give the soap and new look and to change the name. 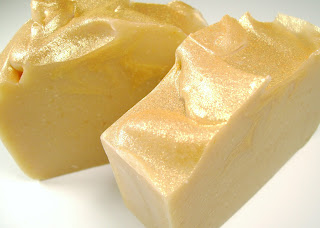 It's inspired by Rice Flower & Shea but apparently (to everyone's pleasure) not an exact dupe.   I was thinking of something like 24 K Gold or Midas Touch, but I don't think those are soft enough for such a beautiful fragrance.  For now the new name is Golden Blossom.  We'll see how well that goes over.
Posted by Kia - Petals Bath Boutique at 1/15/2011 09:01:00 AM 4 comments:

Bubble Bars are a really fun way to take a bath.  It's bretty much a solid bubble bath.  You simply crumble the bar under running water and the water preasure will create the bubbles.
Monkey Farts Bubble Bar 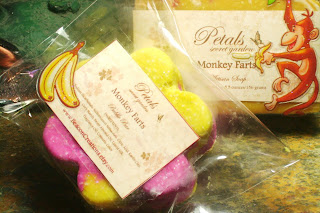 Most peolpe like to cut them into half or even into 3rds.  I like lots and lots and lots of bubbles, so I use the entire thing.  For an even more luxurious bath, I use the corresponging soap and drop in a matching Bath Bomb OR create a "Bath Cocktail" by using different scents that compliment each other.  I once used a Salty Mariner Bubble Bar with a citrus scented Bath Bomb. The bathroom and my skin smelled soooo good.
Posted by Kia - Petals Bath Boutique at 1/14/2011 09:30:00 AM No comments:

Monkey Farts Gets a Makeover

I really wasn't that happy with the way my first batch of Monkey Farts turned out, so I decided to give it another go. Initially it was still going to be yellow but I wanted to improve the red swirl. The red swirl turned pink and then lost it's sharpness and sort of started to blend into the yellow. I used mica and oxides this time, so the colors will stay put and I'll be happy :0) 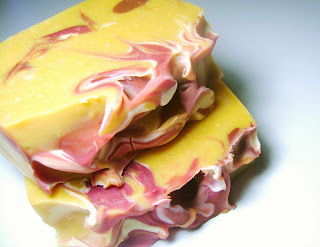 I found these really cute stickers to decorate the package for the soap  as well as the matching Bubble Bars. 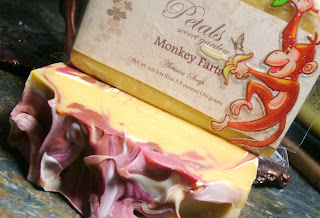 Rock Starr has a new look

I'm back :-)  Happy new Year to everyone.  It was a crazy and busy 2 months for me closing out 2010. Which was awesome because that meant SALES!  Now that things have slowed back down, I can get back into the groove of things.  Starting off, I'll share my newest batch of Rock Starr which is a dupe for LUSH's Rock Star fragrance. 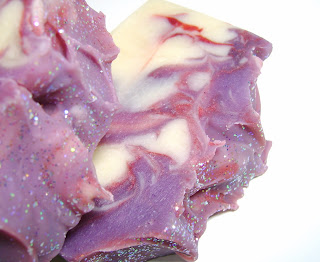 This scent wasn't a favorite of mine when I first made it (still isn't) but it's grown on me.
My thing right now is all about trying to get cool swirls in a loaf soap without doing the in pot swirl. 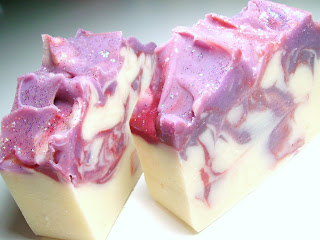